The South Australian Government will operate additional random roadblocks into the Riverland and appoint a dedicated coordinator as part of a suite of measures to ramp up protection against fruit fly for the coming summer. 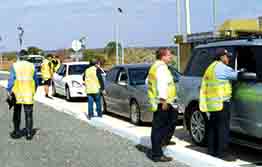 Recognising the increased pressure from fruit fly with the pest rampant in neighbouring states, the government is working with industry to deliver extra biosecurity protection including:

“I’ve been working closely with industry on ways we can increase the state’s fruit fly protection and it’s important these extra measures are in place as we come into the warmer months,” said Minister Whetstone.

“Recognising the importance of coordinating the Riverland’s fruit fly preparedness, industry and the State Government are co-funding a new Riverland Fruit Fly Coordinator who will be based at the Loxton Research Centre.

“Through these extra measures we will be checking more vehicles and sending a strong message to anyone coming into our pest-free areas to adhere to strict quarantine rules.

“This government is being proactive instead of reactive when it comes to biosecurity in this state.”

The new Riverland Fruit Fly Coordinator position will be undertaken by Brett Kennedy and his key responsibilities include early detection and diagnosis, prevention, risk mitigation, grower and industry liaison, and response preparedness.

“Mr Kennedy will work closely with the Riverland Fruit Fly Committee which includes key industry groups across a range of commodities such as citrus, wine, stonefruits, cherries and pears” said Minister Whetstone.

“This new position will be important in further educating growers about their responsibilities to keep the Riverland fruit fly free.”

“The new Riverland Fruit Fly Coordinator co-funded by industry and PIRSA demonstrates our region’s commitment to collaborate jointly to address the biosecurity risks in our region and to protect the Riverland PFA at all costs,” said Mr Burdette.

“The new position of a Riverland Fruit Fly Coordinator is a great step and tool in the proactive management of the Riverland’s PFA – it definitely helps in maintaining the economic benefits that being fruit fly free gives, not only to various industries but the region in general,” said Mr Size.

Mr Kennedy holds a Diploma of Production Horticulture and brings extensive technical experience in horticulture for a range of commodities.

Acknowledgement: reproduced from an article published by Primary Industries and Regions South Australia