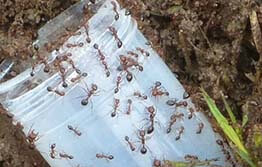 “We are on track to achieve the world’s fastest eradication of an invasive ant species, which has the potential to devastate our economy, environment and way of life,” she said.

Ms Corcoran said the fire ant program would conduct comprehensive surveillance across Yarwun and the wider Gladstone region between now and the middle of 2016.”

“We will be undertaking the largest fire ant surveillance campaign so far in Gladstone,” she said.

“If no more fire ants are found, we would be achieving complete eradication in just two and a half years, which is one and half years faster than Gladstone’s previous fire ant eradication.”

“Our odour detection dog Willow will be putting her nose to the ground over the coming months in and around Gladstone searching for fire ants.

“Our sniffer dogs are the final line of defence, giving us almost complete confidence that all known fire ant colonies have been destroyed.”